“Courage and Stamina and Love”: Celebrating My Cousin Rachel

February 4th is the birthday of two of the most important and influential women in my life, my maternal grandmother, Priscilla Swan Nesbit, who was known in our family as Grammy Peg, and my Mother’s first cousin, Rachel Oatman Johansen.  Grammy Peg died in the fall of 2005, four months after her husband of 68 years died just shy of his 101st birthday, and Rachel this past October after an eight month battle with cancer.  I’ve written of the inimitable Grammy Peg in THE ANTI-ROMANTIC CHILD, so tonight I want to celebrate Rachel.

Here is the gorgeous obituary for her that ran in the Santa Barbara newspaper: 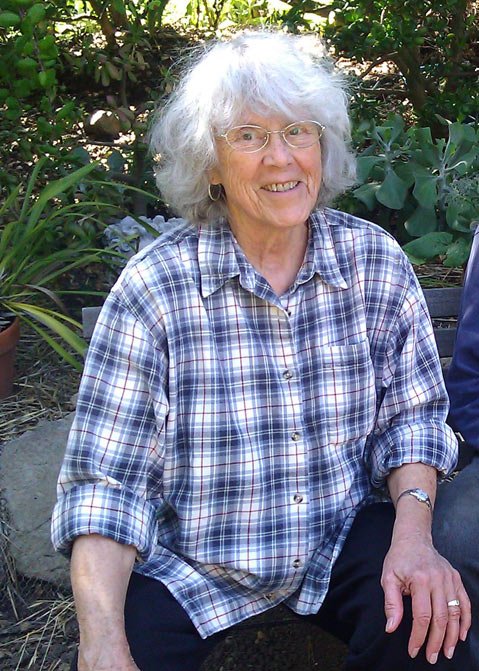 One of my big regrets is that I didn’t have Rachel Johansen to open the doors of education for me. My first classroom experience involved well-meaning nuns who put me on notice there was but one path and that those who strayed wound up in Hell. Thankfully for my own children, Rachel — for 31 years one of the pillars of the Starr King Parent-Child Workshop — was all about giving young minds and souls the freedom to wander, choose, to experiment, and to stumble. In Rachel’s world, failure was not failure if you managed to learn something from it, and experience was always the best teacher.

It was Rachel’s mission to create a safe place — for the thousands of kids going through Starr-King during her tenure — to have as many of those experiences as possible. Sometimes that involved protecting the children from their parents’ best intentions.

Then as now, Starr-King requires active parental participation. Parents show up for mandatory Monday night meetings; they also show up to volunteer for playground or inside duty. This involvement is one of the reasons Starr-King has remained so ridiculously affordable. It’s also how parents are supposed to learn. It took me a while to get the picture. I figured parental involvement meant that when my son was painting in the art area, I could join in and paint too. I can’t remember exactly what Rachel said. She could not have been more gentle about it, but she let me know in no uncertain terms that I was intruding not just on my son’s experience, but on the other kids’ as well. Message delivered, with no hard feelings . . .

To a blabbermouth like me, Rachel could be unsettling. She didn’t talk a lot. But very often, there was a hint of a smile tugging at her mouth, looking to get born. On the job, Rachel managed to exude a remarkable combination of stillness and warmth. To an uncommon degree, she was who she was and where she was meant to be. I never heard Rachel raise her voice, scold, or seem the least bit frazzled. It was unreal. Except in her case, it wasn’t. Rachel was clearly in charge, and everyone knew it.

As a teacher, Rachel was a shower, not a teller, and her passion was always nature. She was a pioneer in what would later come to be called environmental education, though I’m not so sure she’d approve of the term. Every day she brought a collection of seed pods, grasses, leaves, and wildflowers to class for the kids to do with as they saw fit. She always knew what plants were in bloom and where. Rachel was equally famous for the volume of found objects she brought in, ranging from candy wrappers to dryer lint. Eventually, all these landfill refugees would find their way into some art project.

Part of Rachel’s genius was to tune out the ambient din and simply pay attention to what was in front of her. “Most of us spend so much time distracted,” said Gonzalez. “But Rachel would look at things. I mean really look.” After retiring from Starr King in 1996, Rachel volunteered as a docent at the Natural History Museum. She was quick to get down into Mission Creek and muck about, sharing her enthusiasm for nature — and her extensive knowledge of Chumash paleobiology — with school kids from all over Santa Barbara. Watching Rachel put a plant into the ground was “like going to church,” said her husband, Tony Johansen. Except she was too in love with nature to be pious or preachy about it. Instead, said Kathy Harbaugh, who worked with her at the museum, “With the kids, she was ‘Wow! Isn’t this cool!’”

It was at Starr King that many young souls got their first taste of life outside their family cocoon. Inevitably, heads butted. As referee, Rachel ruled by example, treating everyone with the same respect, regardless of age or emotional maturity. David Alonzo-Maizlish — now 37 years out of Starr King — wrote, “Rachel helped me learn how to listen to others. This simple, profound skill comes to mind when I think of her; how she would listen to me no matter if I was angry, scared, or simply prattling on like any other toddler. Her example has stayed deeply with me since then.”

Born Rachel Oatman in Marshfield, Wisconsin, in February 1931, she grew up in Geneva, Illinois, where her father started a business with a process he devised for extracting moisture from cheese whey so it could be used as animal feed stock. On Rachel’s mother’s side there were newspaper people. Rachel studied political science at Stanford University. It was there that she met Jim Schermerhorn, with whom she moved to Santa Barbara in 1955 and whom she eventually married. Rachel and Schermerhorn, a Santa Barbara News-Press reporter with the gift of gab, had two children together but divorced after seven years.

Rachel started at Starr King as a parent, then in 1965 accepted a job as assistant to director Sarah Foote. When Foote retired, she was replaced by Hanne Sonquist. For 23 years, Rachel and Hanne enjoyed an exceptional run together. Rachel married Tony Johansen, having met him when he was a Starr King dad and divorced father of three, in 1973. The clan moved into digs on Glendessary Lane, and they opened their home to Wednesday-evening jam sessions — now officially known as the Glendessary Jam — for banjo, guitar, and fiddle players of the old-timey persuasion. Though Rachel did not join in the jam, she was an avid singer with the Unitarian choir and the Santa Barbara Choral Society.

Rachel died at home October 26 after a eight-month battle with cancer. “Rachel is fine,” she told her husband of 39 years. “But my body has issues.” Before she died, Rachel was surrounded by her family, serenading her with old favorites such as “Amazing Grace,” “Swing Low,” and “Will the Circle Be Unbroken.” Since her death, Tony Johansen said people have sought to console him, saying “Rachel is in a better place.” His response? “When she was here, you felt she was already in a better place, and anyone who came in contact with her was in that better place also.”

Reading this obituary, I realized just how deeply Rachel had influenced me, with her gloriously down-to-earth but wonderfully romantic sensibility, her happy and inspired second marriage (I think of this especially on the eve of mine), her passions for nature and music and devotion to the well-being of children, her commitment to “giving young minds and souls the freedom to wander, choose, to experiment, and to stumble.”  I remember how *game* she always was, how up for an adventure, exploration, or spirited conversation.  I remember her cutting out paper dolls with me and my sister, cooking for us, hugging us with gusto.

Once I was in college, Rachel and I didn’t see each other much as we lived on opposite coasts, but we wrote to each other often, and whenever I received her letters or emails, I was instantly transported to “a better place” by her words and the love that shone through them.  Here is an email Rachel sent me a few months before she died.  I will cherish it always as both one of the most gratifying responses to my book imaginable and one of the purest expressions of love I have ever received:

Oh my dear Priscilla, I had no idea you were such a powerful writer.  I have been completely blown away by your story and feel that every parent should read it.   There is so much to learn.   It’s been quite a journey for you, hasn’t it?  And of course it’s no where near over.  Such courage and stamina and love I have seldom seen in one person.  You are a hero, no doubt about it.
We love you a lot and hope we will see you when you come out to the West Coast for your book engagements.

I’m doing great, by the way, beyond the doctors’ wildest expectations, so let’s hope it stays that way.
Love and hugs to you and the boys,
Rachel

Sadly, I never got to see Rachel again.  “Such courage and stamina and love, I have seldom seen in one person” indeed.  Rachel was a hero to me and many, many others.

A few days after Rachel died, her son, my cousin Matthew, posted this on Facebook.  He had found it taped to the mirror in Rachel’s bedroom.

Being Awake adapted from Circles of Stones
– from mom’s mirror

I am finding that it takes a lot of time to be a person. To have a
feeling of space and breath, a chance to sink into myself…as long as
I take time every morning to awaken to my life, it remains my life.
But if I hurry to the day’s activities without that small moment of
quiet, then I’ve already lost my self and the day.

The task, for me, is to care, daily for my self and my life, to love
and nurture, within myself, moment by moment, the quality of quiet
Presence, Quietly being present to my life, which sanctifies it – to
live as if I am awakened.

Rachel, you awakened countless young children and their families with your generosity of spirit, wisdom, and kindness.  Thank you for loving and nurturing me, and for sanctifying my life with your goodness and strength.  Thank you for teaching all of us how to be present to our lives.

Get Priscilla’s Q&As and blog pieces in your inbox